Promoting the need for innovation was the reason the PROGRESS in Lending Association was formed over three years ago. Through its monthly online magazine and daily newsletter to 8,500 mortgage executives, it offers lending professionals ways to "create process efficiencies through sound business strategies and technology." 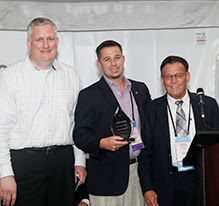 Each spring it singles out major innovations from the past year with awards presented at the Mortgage Bankers Association (MBA) Annual Tech Conference. At last week's conference in Hollywood, Florida, NCS was honored to be among the seven 2013 winners.

NCS was recognized for its work helping the IRS prepare to accept eSigned 4506-T forms, which lenders and others use to request tax return transcripts. The award paid special attention to the work of NCS Senior Vice President Cecil Bowman, a former IRS manager for 35 years, who led the industry workgroup that facilitated the IRS policy change that went into effect January 7.

In the May 2013 issue of its Tomorrow's Mortgage Executive magazine, which will be available online beginning May 7, Garritano wrote:

"PROGRESS in Lending has named NCS a top innovation because for the past three years it has been a driving force behind the mortgage industry's IRS electronic signature initiative for the income verification IRS Form 4506-T. . . .

"NCS has been able to accomplish what the big players have not: revolutionary change in income validation for the mortgage and financial services industries. The leadership and work of NCS has benefitted the entire mortgage industry as the IRS signature program will reduce production costs and risks, and speed up originations and loan closings....

"NCS had the IRS expertise to bring together MBA and top industry players to fashion an e-signature Proof of Concept that worked, paving the way for rapid IRS acceptance of the program....

"Electronic signatures are certainly not new," Garritano told us. "But it really took MDIA [Mortgage Disclosure Improvement Act of 2008] to get lenders to adopt it, and when they did it was more around the upfront disclosures. However, I spoke at an eMortgage panel just a year and a half ago and I got a question from a lender in the audience asking me if electronic signatures are legal."

Garritano believes that confusion will soon be a thing of the past.

"And I think that's a good thing for the mortgage industry."

The 2013 winners were chosen from 30 applications. Entries were scored on a weighted scale by every member of the PROGRESS in Lending Executive Team. The judges voted on "overall industry significance, the originality of the innovation, the positive change the innovation made possible, the intangible efficiencies gained as a result of the innovation, and the hard cost and time savings that the innovation enables industry participants to achieve."

The June 2013 issue of Progress-in-Lending Magazine includes interviews with the winners, including Cecil Bowman.

For information on the NCS Electronic Signature Solutions, created in partnership with eSignSystems, contact us.